Review of Nomadland (2021) by Chloé Zhao, starring Frances McDormand, Bob Wells, and others. 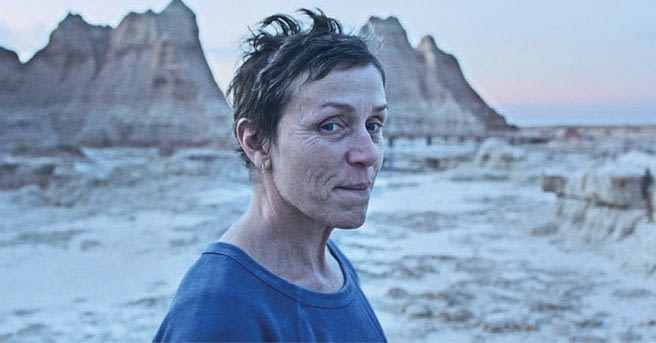 Lemme start this piece with a question.

When was the last time you saw a film that made you rethink the way you live your life? Or made you yearn for something so much that you were willing to drop everything you stood for all your life and start over? Or made you ponder the meaning of it all?

For me, I had to go all the way back to the SRK starrer Swades.

No, I don’t mean there haven’t been good movies lately. In fact, a lot of films over the recent years have been so so good that you wonder where were these filmmakers all this while. I think with the advent of OTT and D2C, the business has moved into a territory where experimental, edgier, deeper films are possible. Stories like Whiplash, Three Billboards, and more would never come to life in an era when theatres dictated the fortune of films.

Closer home, films like The Disciple (yet to see), and even Gully Boy (even though I am not a big fan of it) would never happen if we continued to look for formulaic cinema that has come to rule the box offices, production houses, and audiences. In fact, I must mention films like Irul and Joji (I recently saw these). If not for OTTs, I would not even have these in the consideration set. These were among the first few non-Hindi, non-English films I saw and I was mightily impressed with them. More on these later, before I digress too far ahead.

Coming to the film that I want to talk about today.

Nomadland.
Spoilers ahead. In case you havent seen, please read with caution.

Nomadland, the film has a fairly simple story. The kinds you would dismiss if you heard it as a pitch. Fern, a widow (played by Frances McDormand) decides to skip the town (strangely called Empire) where she’s literally lived all her life. In two unrelated incidents, her husband has died and the town gets shut (and she loses her job). Instead of going to live with her sister or other relatives, she chooses van dwelling and hits the road. Along the way, she picks temporary, seasonal jobs to make ends meet. And meets others like her. The ones who have decided to remain on the move for perpetuity. Somewhere along the road she discovers herself and finds the closure that she’s seeking.

That’s it. That’s the story!

Even as a writer, I cant seem to spot the arc in the story (or the character), the three acts, the inciting incident, the conflicts, and so on and so forth. And yet the story, the narrative, the film is gripping.

Irrespective. It’s been a few days since I saw the film and it has made me rethink the choices I’ve made in my life. It made me yearn for the interplay of predictability and adventures that open roads that tend to have. After all, they have a destination per se and yet could potentially lead to nowhere. It made me question my raison d’etre. I was so moved, so inspired to let go of whatever little I have at the place I call home. And I will not lie, I have started to make an inventory and sort whatever little I have in two piles – one to be sent to storage (my parent’s home in Delhi) and the other that I will carry along.

Oh, I must also mention that often the time and the stage in life at which you see a film tends to amplify the impact it has on you. It’s poignant and uncanny and insane that I saw Nomadland at a time when I am surrounded by so many people who are forced to say untimely goodbyes. To me, it’s thus become a film about coping with grief, coming to terms with our impermanence, thinking about mortality, letting go, and on top of it all, continuing to move on.

I loved how the film starts with Fern gingerly packing all her belongings in long-term storage and heading out. And I loved how the film ends with Fern discarding all that she had (apparently) carefully stored (cos we enter that scene late). It’s so poetic that I can’t seem to get over it. The inventory I talked about above is inspired by exactly this!

The film follows Fern’s journey as she moves around the country, taking odd jobs to pay her bills, trying to overcome obstacles that a nomadic life throws at her, and her search for herself, through the lens of others, the relationships she develops, and the community of other van-dwellers. She even calls herself “houseless” and not homeless. She’s accepted the van as her home. Along the way she makes friends with strangers and finds solace in this Sage figure of Bob Wells that’s like a savant and messiah for van dwellers and others of the ilk. There’s even a hint of a love interest with another van dweller, Dave.

At each juncture, with each person Fern encounters, the film throws at me a reason for choosing the road over what Dave calls spending “another night under a roof”. Bob is probably coming to terms with the loss of his son and what he does is his way to make amends with his inability to undo things and bring his son back. Swankie is terminal and doesn’t want to die in a hospital. There’s an even more stable, more relatable, more normal family of Fern’s sister that is picturesque and poster-child of American success. From their lens, you see that they crave the freedom that Fern has. And on this side is the contrasting reality of Fern where she’s forced to visit her sister to borrow some 2000 dollars to fix her van! Uff!

I loved how each character had a well-developed backstory that they literally narrate. The film reversed the old age “tip” of showing and not telling. I mean there’s a lot of telling, a lot of symbolism and yet it just feels right!

To me, the biggest takeaway from the film is NOT that there are people that choose a nomadic lifestyle. The takeaway is that all of us are so communal that we need shelter in a community of others, like-minded individuals who believe in the same ideology as you. This shared ideology is what often helps you tide over your battles – personal or otherwise; large or small.

In fact, all my life, I’ve wanted to build a community of people like me. People that are innately curious, people who want to live a life full of adventure, excitement, non-stop dopamine hits, and exploration. People that want to do more, help others do more, and along the way live a great life. People that push us, humans, ahead. I think this bit about community and the need to belonging is probably the most fundamental of all our needs. Something that we are willing to kill for. You know the world today is a testimony of how our attachment to our communities and ideologies has brought us to a brink!

In Nomadland, the community that Fern eventually finds is of people that seek freedom and yet of escape. It is this community, through the interplay of emotions and life and death and love and separation and more, that makes Fern reconcile with her loss and eventually helps her accept the life that she’s chosen for herself.

In terms of the visuals, the cinematography, the film seemed to have filled in the vast, empty, remote American landscapes with dense emotions and turmoil that each character seems to be going through. As an aspiring filmmaker, this is something that I need to note and work on when I make my film.

There is this scene in the film where Fern is holding a lantern and is walking across the trailer park. It is probably among the best pieces of camerawork and imagination. It’s such a great metaphor for you trying to find yourself amidst all the others around you. There is another where Fern is floating naked in a rivulet. Oh man, the bliss that she’s in! Then those tight shots of her in her van where she’s so intimate with the congested space that you almost feel guilty about deriving voyeuristic pleasures from seeing her interact with things in her “natural habitat”.

There’s so much to love about the film.

I love the writing. Even though there are few words, few dialogues in the film, each word spoken by each character is like a pearl. Each line is crafted with so much care that it shows. Each sentence is worth hanging onto.

I loved the juxtaposition of struggle fight against large businesses like Amazon and then, on the other side, reliance on such businesses to pay your bills. The neverending fence that divides capitalists and free-right advocates.

I loved how the film spoke to me at a personal level – I don’t want to be in a hospital when my time comes. I like the idea of freedom. I want need a community where I am understood.

The most pivotal part of the film for me is right at the end when Fern and Bob talk about Bob’s life. I was stunned when he explains the rationale of “down the road”.

My jaws literally touched the floor when I heard that.

At that point, the meaning of the film, the unknown that Fern and others were chasing, the known that Bob is after, and the reason why I do what I do, as Saurabh, became crystal clear. Like someone opened the all-knowing, all-seeing, third eye! Once you see the film, hope it’s evident to you as well.

So that’s about from me about Nomadland.

I have to say that great films not just tell you a story, but also change something in you. You shift as an individual. You empathize with the protagonists so much that you want to make changes to your life. Nomadland is one such film. Please do watch it and be ready to shift. It deserves all the accolades it’s got. Probably more. And it deserves your attention.

See you, down the road.

PS: I was on the fence about buying a car. Now, after I’ve seen the film, thought about it, written this piece, I think I will make an attempt to get one. Let’s see when.