Prof. Joseph Campbell’s Monomyth model (The Hero’s Journey), as seen from the lens of Amitabh Bachchan’s character in the Salim-Javed film, Deewaar. 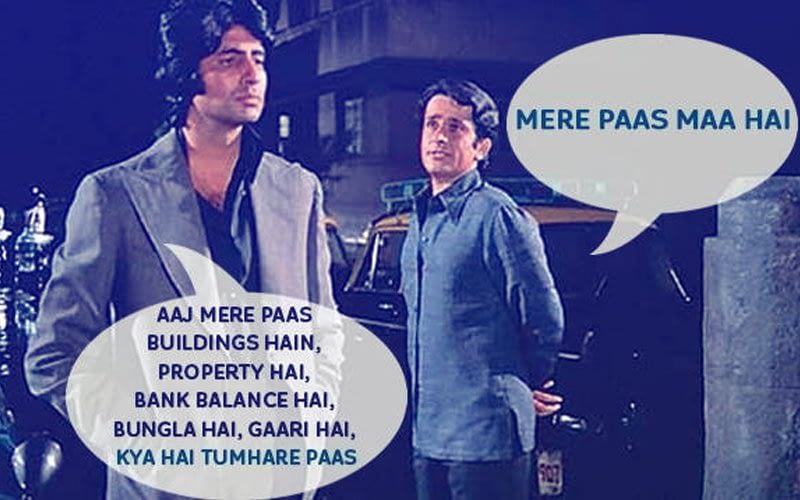 Show me a person that does not know this dialogue. And I will show you someone who has NOT lived! Not at least in India.

This is among the scores of iconic dialogue from the film, Deewaar. Released in 1975, directed by Yash Chopra and written by the legendary Salim – Javed, Deewaar is what you expect a film to be – a roller-coaster journey through the lives of characters next door. From the degradation of a righteous man who chose to take a stand for the poor (and failed at it), to the ecstasy of the new-earned wealth of a young man (who has lived in abject poverty as a kid), the dismay of a mother who’ll be made to choose between her sons, the film not just entertains you, but also makes you question your own decisions, morality, and at least in my case, life!

So, as an aspiring filmmaker, I HAD to reverse engineer the brilliance of Deewaar, learn the tenets of what went in while they made the narrative, and then, hopefully, use those when I write my scripts.

One of the things that I realised, after I attended online sessions with Anjum Rajabali was that most great stories tend to follow a simple narrative structure of The Hero’s Journey. Discovered by Prof. Joseph Campbell, The Hero’s Journey (also known as the Monomyth) postulates that in most myths and folklores and religious texts (and thus popular culture and books and films), the protagonist typically faces a challenge. To sort it, he has to leave his current world (and often, the ordinary and comfortable one), spend time in the other (and often the challenging world) where he would fight a demon, and then come back to his ordinary world. In this journey, there are 17 distinct stages, and at each stage, he grows as an individual. A pictorial representation looks like…

I first wrote about The Hero’s Journey. Then, along with Shreya (of Green Grandma fame), I did a deep dive and wrote the Hero’s Journey for Munna Bhai MBBS. And I decided that I would read and publish as many as I could to learn as much as I could.

So, The Hero’s journey for Deewaar is the second in the series of explorations that I am doing, this time, with Hemant Joshi (who I met at one of the SWA sessions).

Deewaar starts as the story of one Anand Verma and his family (wife Sumitra Devi and two young sons, Vijay and Ravi). Anand works at a local factory and is an honest, hardworking, and righteous worker. And naturally, the leader of the union of workers.

These workers are at loggerheads with the factory owner, who in turn is, well, like any other factory owner – a conniving, scheming bastard! The workers go on a strike and mandate Anand Verma to negotiate on their behalf.

The factory owner abducts Verma’s family and asks him to pick the family or the worker’s rights. Verma, like a typical Indian, chooses his family. The workers are disappointed and thrash him, leaving him in a hospital. Verma is unable to handle the emotional turmoil and runs away, leaving behind the mess that he’s created. While Verma is drifting, his family continues to be ridiculed whenever they step out. One of these days, the elder son, Vijay is manhandled by goons in the market and they tattoo “Mera Baap Chor Hai” on his forearm.

Sumitra Devi moves herself and the sons to Mumbai where they are forced to live on the footpath and sleep under a bridge. Sumitra picks up odd jobs and is unable to meet the expenses. This is when Vijay steps up (not even a teenager at this point) and decides to support his mother with Ravi’s education and upbringing. He starts as a boot-polisher.

On one of his regular days, after he’s cleaned the shoes, one of his customers flings a coin at him. Vijay is angered and says since he’s worked hard on shining the shoes and he deserves respect. Dawar, a local goon, is accompanying the customer spots the talent in Vijay.

We take a leap in time and Vijay is now working as a coolie at the docks. Vijay strikes against the local goons (controlled by Samant) collecting hafta from all the laborers. Furthermore, he goes into their den and thrashes them.

This is noticed by Dawar (who’s another adversary of Samant) and he invites Vijay to join him in his business. His first job is to ensure that Dawar’s smuggled gold is safely brought into Mumbai. Vijay hatches a smart plan that involves duping Samant and is able to execute flawlessly. Samant pledges revenge!

Vijay’s life starts turning around – he buys his mother a better house, gets himself a better car, his clothes get better. Everything in life starts seeming better.

On the other side, the younger brother, Ravi completes his education and goes away to train for being a police officer. When he returns, his first case is to rein in Dawar’s businesses. Ravi realizes that he would have to catch his brother to solve the case. He refuses initially. In fact, he goes and asks his brother to surrender. Vijay refuses. The brothers have a dispute over this. Their mother takes the side of the righteous one, Ravi, leaving Vijay all alone in his giant mansion.

A few days later, Ravi decides to take the case again and starts catching Dawar’s men one after the other. Dawar realizes that Ravi must be stopped somehow. One of his gang’s members suggest that Ravi be killed, but Vijay stops them. Vijay tries to convince Ravi to back away from Dawar’s men, but Ravi holds his ground.

Their mother falls sick but Vijay cannot visit her – the cops are staking around the hospital. Vijay is distressed. Around the same time, Samant, who had pledged revenge, kills Vijay’s girlfriend. Anguished, Vijay goes to the hotel where Samant is staying and kills him. In the process, he exposes himself to Ravi and the cops. Left with no choice, Ravi fires at Vijay. Vijay manages to drive away, only to hold long enough to come to his mother praying at the temple she frequents. He eventually dies in her lap.

And the story ends.

The Hero’s Journey for Deewaar

In our opinion, the Hero of this film is Amitabh Bachchan’s character. And we would use this vantage point to explore the Hero’s Journey.

As always, before we get in, here are a few disclaimers.

Even though NOT all stages of the Hero’s Journey are evident in Deewaar (they weren’t evident in Munna Bhai MBBS either), the story clearly follows the structure. Enough to warrant an investigation and research!

That’s it from our side. Please do give us feedback on our interpretation.

Also, should you want the open files and notes that we made that we have not published, please email us and we’d be touch. We have Deewaar’s script broken into a beat-sheet (our interpretation and may not be right), and various stages of the Hero’s Journey, as adapted for Deewaar. Happy to share those!

Oh, a disclaimer for the millionth time – these are our interpretations and could be incorrect. This is merely an academic exercise to learn more about Hero’s Journey! Do help us.