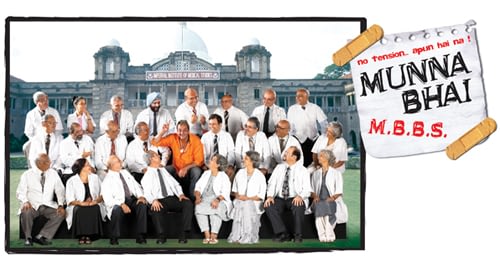 You know, Munna Bhai? The film? Well, this is where Shreya and I try and decode the idea of the Hero’s Journey via how they’ve been portrayed in popular films. Read more about the project here.

For each film that we take up, we would talk about the plot, break that into a beat sheet, and then try to identify what part of films fits into what part of the monomyth structure.

Without further ado, here we go!

The Sanjay Dutt starrer was written by Rajkumar Hirani and Vidhu Vinod Chopra.

The story, set in contemporary Mumbai, is of Murli Prasad Sharma, aka, Munna (played by Sanjay Dutt). He is a Robinhood-ish goon for hire in Mumbai. As a character, he is simple and flawed. He’s all the happy-go-lucky and all he seeks in life is approval from his father. But his flaw is that he’s lied to his father (Hari Prasad Sharma, played by Late Sunil Datt) that he’s a doctor and runs a hospital in Mumbai. To live that lie, he puts up an elaborate facade everytime his father comes to visit him.

All’s well in his regular life, till his father bumps into a real doctor (Dr. Asthana, played by Boman Irani) and proposes that Munna and Dr. Asthana’s daughter (Chinki / Dr. Suman, played by Gracy Singh) get married to each other. On the day when the marriage discussions were to happen, Dr. Asthana finds out the truth about Munna. He humiliates Munna’s father and throws them out of his house.

Hari Prasad Sharma being the man of his honor, he feels humiliated, disowns his son and goes back to his village.

Munna is aghast – the only thing he held dear (his father’s pagdi) has been attacked and he is helpless! Against the advice of his trusted flunky (Circuit, played by Arshad Warsi), he decides that he would become a doctor for real and earn his father’s respect.

The story then follows Munna’s journey as he uses rather unconventional methods to navigate the world of medical studies. Along the way he finds his love in the very person he was supposed to get married to, makes friends across genders, cadres, backgrounds et al and collides head-on with the steadfast, moral, principled Dr. Asthana.

As the film ends, like the proverbial Hero, Munna wins all that there is to win and turns his “enemies” into allies. And, they live happily ever after!

The plot, broken into a beat sheet. And the Hero’s Journey structure.

Disclaimer for a millionth time – these are our interpretations and could be incorrect. This is an academic exercise to learn more about Hero’s Journey!

Also, we will use the following interpretation of the journey that places equal “weightage” to all three stages (unlike the more popular one that is skewed towards the two worlds).

Even though NOT all stages of the Hero’s Journey are evident in Munna Bhai MBBS, the story clearly follows the structure. Enough to warrant an investigation and research.

Please do give us feedback on our interpretation.

Also, should you want the open files and notes that we made and have not published, please email us and we’d be touch. We have Munna Bhai’s script (found via the internet), script broken into beat-sheet (our interpretation and may not be right), and various stages of the Hero’s Journey, as adapted for Munna Bhai MBBS. Happy to share those 🙂

What would we improve if I was asked to make the film better?

A. We’d make the villain a tad more powerful.

Thing is, in our opinion, in India, we do not believe in an all-powerful, impossible to kill villain. In most of our stories, once the villain is often a lesser mortal than the hero. Of course there are parts where the villain is strong, after all we like to see fights, but Hero remains the more powerful entity. The way we go through the struggle of the Hero, we often leave that out for the villain. Compared to the West, they spend as much time on the villian – this makes the villain as loved as the hero. Case in point? The Joker! In our lores, we all know that Duryodhana was an accomplished fighter but he was blinded by his lust for power. In the retelling, we don’t delve on his good parts. Similarly, Raavana was a Pandit but we don’t really spend a lot of time showcasing that.

In Munna Bhai, we know that Dr. Asthana is a straight-jacketed individual. But we do not go into his past to understand why he’s like that!

B. The character of Dr. Suman / Chinki.

The other part that is lacking in this story is the character of Dr. Suman. She has a very very insignificant role to play. She does not help him cheat, she does not get vocal against her father ever, except the last scene (which looks like a forced fit). She is even ok with the idea of getting married to a person that she’s not seen after she was a kid!

What few things could we add to make the story follow the Hero’s Journey more closely?

A. The character of Munna had to reach the final destination by himself. And not use assistance from Dr. Suman to rally the support.

B. We did not find an active mentor (apart from Dr. Rustom) guiding him through.

Here are some things that we read while we were working on this piece.

So, Raju Hirani lived with the idea of Munna Bhai for 9 years. And between Shreya and I, we do NOT have that many years of experience of even watching films! We are nobodies to critique his work. All we can do is learn from the output and other conversations he’s had with people about his work.

Raju Hirani says, “the message I wanted to convey to the doctors was to have more compassion. If they want to make money they should go somewhere else” and I think it’s amply clear in the film. Even when Munna gives up (in the last scene) and moves on, he goes back to being a compassionate goon and not a greedy doctor!

He further says, “Cinema is all about entertaining. My principal motto is, ‘I shall entertain’. Nobody walks into the theatre to be preached to or to learn something. So I have to be sure that whatever I do, even when I have a message to deliver, it must be done in a manner that is highly entertaining. Cinema is storytelling and story telling is about entertaining. At the same time, it is a commentary on reality.” Again, something that is VERY evident in Munna Bhai.

He adds in another interview, “Never Lock The Script: Never call anything finished, keep writing it and it keeps getting better. Sometimes an idea which is ‘good enough’ can become perfect if we keep writing some more.” I think this is where we take courage. Even if a film has been shot and loved by people across the world, there is merit in going back and seeing what could’ve been better. Of course we can not make the same film again but we can definitely take back some lessons!

And of course time spent on thinking about Munna Bhai, his story, the Hero’s Journey has given us some incredible lessons!